Well, when I found a left behind Fender pick at our house, it made me think of the ever so popular Stratocaster.  It then made me think that I could use the pick on his birthday card.  Then I remembered an image from The Greeting Farm I had received from a friend at SCS.  I have only worked with one other TGF image, so it was fun to play.

So here is Rock Star Anya, with her Stratocaster and Fender pick: 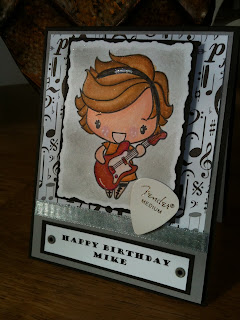 The image was cut out with Nestabilities.  I then sponged the background with Stampin' Up! Going Grey ink.  The image is colored with Copic Markers.  I added a few Stickle highlights and then sprayed the image with Shimmer Sparkle Spray.

I had the ribbon and eyelets on hand.  The sentiment was computer generated.

Thanks for looking.....hey; doesn't all this guitar talk make you want to listen to some music?!  Better get goin'!

YOU ROCK!
Very kool card!! Love the sophistication of the black and greays together!

Great card! Thanks for joining us at Stamp Something this week.
hugs,Tanja

Thank you for joining us at Stamp Something this week.
Dorte aka dot-scrap

Amazing! This card is absolutely incredible. I love the guitar pic too!! Perfect embellishment.