Luck of the Irish!

Did you know that the original color associated with Saint Patrick was BLUE?!  Yeppers, it was.   As St. Patrick's Day evolved, it changed to green.  People have been wearing green on St. Patrick's Day since the 17th century....that's a lot of pinches!

The shamrock was used by Saint Patrick to explain the Holy Trinity to the pagan Irish.  The term 'wearing of the green' is to refer to wearing the shamrock on your clothing.

Well, since I am probably not going to be wearing a shamrock, I thought I would try to make one.  My friend Jeanette, sends out links to blogs featuring paper punch art.  So I thought well, that Martha Stewart heart punch I recently purchased would work for shamrock leaves.   I ran the green paper through the Cuttlebug to add some texture, punched some hearts, cut some stems and used an eyelet to hold it all together. 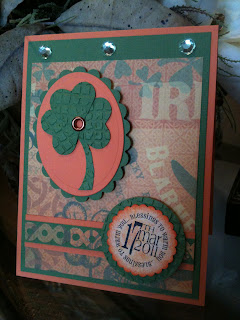 The card base is Stampin' UP!, Only Orange.  The green paper is from Bazzill.  The DP is so cute, that I did not want to cover it up!  It is from Karen Foster, Irish Gold.  The rhinestones are a really pretty light green that did not photograph as such, but from Relections at Michael's.  The sentiment is from Create with TLC.  I also used the oval scalloped Nestability and an EK Success edge punch for the Celtic looking circles.

My family is Irish, so I had some shamrocks to make! They should be arriving in mailboxes today. I hope that they like them.

Have a great St. Patrick's Day! 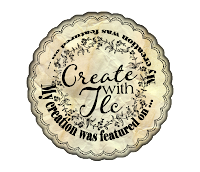 Wow....love the colors and the feel of the card. It's wonderful~!
Paulette
TlcCreations

This is over the top Fab!! WHat a fun design and a true fun card for the luck 'o the Irish! Happy St. Patrick's Day to you!

Love your punch art shamrock! Nicely done! Thanks for joining us at Catch the Bug!

Such a lovely card! Thanks for joining us this week at Catch the Bug!

Tami, how cute!!! Aren't punches incredible!?!?!? I love finding things to inspire us! And you've done an inspirational job!!!