Here were are the Calendar Girls, with our August creations!   Debbie, was our hostess this month.  She was inspired to give us our challenge this round from the Olympics.   While the actual events may have passed, we will be taking another look via our challenge.

We were asked to use an image that would go with an Olympic event theme.  Well, the first thing I thought of was ice skating.  Why you may ask.   Well, it's not because I do it!   LOL   It is because the most notorious ice skater in the Olympics is from around our area.   Yeppers, Tonya Harding.  The knee capper conspirator herself!   Way to bring global shame to a city.    From knee capping, sex tape selling, hub cap flying, female wrestling to commentary on the series World's Dumbest, she's our gem!

You might be thinking that I am being a bit harsh on our friend, Tonya.   Well, during the whole scandal there were a lot of legal requests for her and her husband's telecommunications records.   Thus, she would be in our office often.   We had the same team dealing with her.   Guess who got to be on the team?   No bueno!

I can also say that she could really skate.   Amazingly so.  It is a shame that she was not confident enough in her abilities.   She was the first US skater to complete a Triple Axel in competition.   Shown here at 58 seconds.  Did you know that it is named axel after the Norwegian skater who invented it in 1882 and that it has mainly been performed only by men and only a handful of women have been able to do it?  Sorry....back to the card.....

Well, I do know that Sophie is set to do a quadruple axel (is there such a thing?!) here in this card.  I color inspired her from the pro!   Hope you like her!!!! 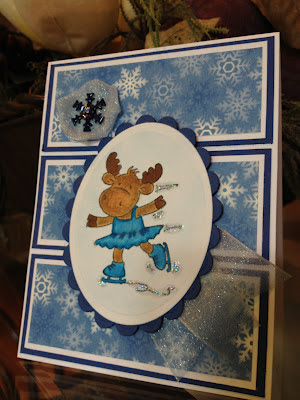 Please be sure and stop by the other Calendar Girls blogs to see what Olympic wonders are to still be seen.  Their blog links are on the right sidebar.  Have a great day!
Card entered in the following challenge(s):  Make it Monday
Copyright :: BlueInks :: on 8/28/2012

Tami....she is cute ☺ Love the card, the layout and the colors! Great job in putting it altogether!!

Oh Miss Tami, Sophie and her skating outfit on - perfection! (I contemplated strongly to do Boxing RIley, lol) Your card design and pape are just as lovely as can be! It gives the card such a great dimension but still showcases your gorgeous Sophie coloring, too! I'm a huge ice skating fan when the winter Olympics are one and just loved Nancy Kerrigan back in the day - this rivalry was so terrible and I'm sure TH has had to live with this tenfold. Interesting facts about meeting her 'in da office' so often - that had to be about as much fun as when OJ Simpson would be out in his yard just blocks from my daughter's old school! Fun times ..... not :)

What a fun card... love Miss Sophie on skates! And your snowy background is perfect for her!

I also enjoyed your videos and your humor in your post! Tami, you always make me smile!

You've earned Gold, for sure!

I think this image is so darn cute--just perfect for our challenge! Great colors and a cute layout too!

Adorable Miss Sophie (and a much better sport I am sure than the notorious Mrs. Harding!)! Beautiful card! :) Cannot wait to see Sophie's performance!

I agree, Sophie MUST be a better sport than TH!! Who wouldn't be??

Seriously, love your card! The dp is TDF and I love how you colored her up!!

Oh Tami, your blog posts are so interesting and I so look forward to reading them. They are funny, informative and a delight...I love your little Sophie as well...perfectly colored and executed...awesome paper and love the little snow flake brad with the beautiful ribbon...I'd say a "10" for sure...well done my friend, well done.

Pretty, pretty, pretty! I love the blues and all the sparkles in the glitter and the ribbon? And your posts are always so entertaining! I give you and Sophie a 10!

Wow!! I saw you on MIM and came to have a peek. Would love for you to come enter my stamp giveaway.

Beautifully coloured fun image . Love the ice sparkle.And the snowflake paper to match .
Thanks for sharing on Make it Monday

So sweet! I saw your card on MIM and had to drop by for a closer look.

Stop by my blog to check out my {Belated} Birthday Blog Candy!

Super cute, love the three panels on your background!

AWwwwww! I really want to go ice skating now (and it's starting to get colder in Seattle!). Your Sophie card is too cute!! Great layout!! Hugs, kadie