As a part of Splitcoaststampers (SCS) Taylored Expressions recently became a Member Company.   As an announcement of this membership, there was a thread that offered a card making challenge using Taylored Expression stamps.   Even more exciting, is that there are free digi stamps being offered here.

I used the apple basket digi to create this card.   I remembered that I had some apple DP {remember I am trying to use up the DP's that I have!}.  I paired it with some various colored card stock.  I used a die cut at the craft store to create the fence.  A cute Fiskars punch made the apple.   I sponged some ink on the yellow card stock.  I cut out an apple from the DP {that was fun!} to put on the computer generated sentiment.   Two eyelets, some more sponged ink and a recycled piece of raffia and we are complete!

I know, doesn't it make you want an apple right now?!  Would I appear too cheesy, in the fact that I ate an apple while creating this card?!  Talk about the power of suggestion!   LOL

You still have time to join in on the challenge!   It closes on March 21st at 8PM CST.   The prizes will be announced on the thread listed above.

I hope that you like the card and thanks, for taking the time to peek in on it! 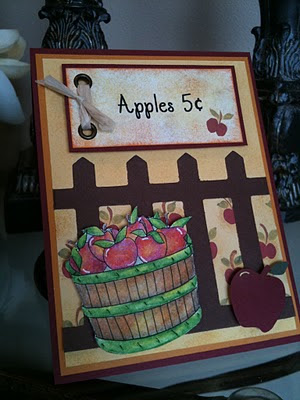 Tami, this card is awesome! Yes, it does make me want an apple! In fact, when lunch time rolls around, I think I'll have one! ;)

Good luck; I hope you win! Speaking of which, have you checked my blog today???

We saw apples while at the market this weekend; and I didn't but them :-(

Tami,Thanks so much for stopping by my blog and your kind comments. Love your card with all the layers. Great job!

Tami this is a fantastic card. I love the picket fence with the apple DP behind it. What great colors too.

Wow and wow and wow some more, Tam! This is just gorgeously colored and the paper is spot on - love that fence :) Beautifully designed!! x0x0

Tami, such a pretty card! It makes me feel all homey and warm inside! Just love the colors, the fence, the apple DP, the basket, how you colored everything...Love everything about this card. So great!!

What a great scene - I really love the basket of apples along the fence line. Gorgeous card!

Oh Tami, what a great card...I am so far behind but wanted to stop by and give two thumbs up on this...great job...♥