September, yay!   I am getting closer to catching up!!!

The Dueling Darlings from SCS made the cutest cards for September.  Terry, sent the Divas a great kit.   Thanks, Terry!

Our image was from Stamping Bella, Edna Loves Chocolate.  Well Edna, so do I!  Is it bad that in high school The Eye Batter (remember my friend that could bat her eyes and boys fawn?!) and I would make a 9 x 13 pan of fudge, cut it in half and each eat our half with a diet coke?!  Holy smokes!

Well, no fudge today.  Just this card!  I used the super sparkly paper that Terry sent.  I had a die cut that I had never used and tried on this.  Boy, I had to run that through the Cuttlebug a few times to cut it, but in the end it worked!

Thinking I will need a piece of chocolate by day end......{wink}. 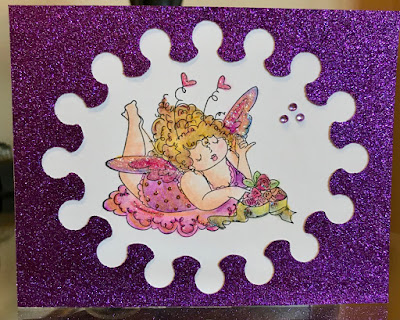 Yay Go Tami Go! :) This card is super! I love the bold glittery background - so dazzling! Except your a diva! And the fun shape around your cutie lady eating her chocolate is a bold and beautiful focal point! Love it!

Tami, this card Sparkles! And sparkles and SPARKLES! WOW!!! Lovely!

Great Card Tami. I love the die you used for the image and your coloring rocks! Love the sparkled paper too!